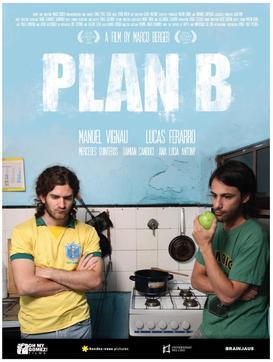 Plan B is a Argentinean comedy-drama film by writer-director Marco Berger. Bruno, a young bohemian living in Buenos Aires, learns that his ex-girlfriend Laura is happily with a photographer named Pablo and becomes jealous enough to begin searching for ways to win her back.

Bruno's initial plan to seduce Laura away from Pablo fails but when he catches Pablo staring at him at the gym and hears from a friend that Pablo once slept with another man, he hatches a "Plan B" to make Pablo leave Laura: befriend him and seduce him instead. Entanglements and complications ensue.

If you're looking for the trope, you want Time for Plan B. Also not to be confused with the 2021 Teen Comedy of the same name.