Series / Never Have I Ever 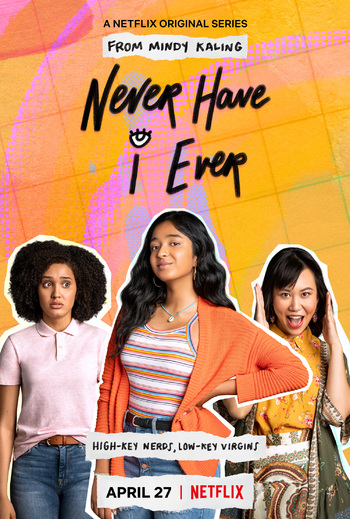 "I'd like to be invited to a party with alcohol and hard drugs. I'm not going to do them; I'd just like the opportunity to say, 'No cocaine for me, thanks. I'm good.'"
— Devi praying to the Hindu gods in "Pilot"
Advertisement:

Never Have I Ever is an American coming-of-age dramedy television series on Netflix starring Tamil Canadian actress Maitreyi Ramakrishnan. Created by Mindy Kaling and Lang Fisher, its first season premiered on April 27, 2020, its second season on July 15, 2021, and its third season on August 12, 2022. Prior to its third season debut, the show was renewed for a fourth and final season.

Fifteen-year-old Devi Vishwakumar (Ramakrishnan) thinks that sophomore year is time to rebrand. Tired of being an ostracized Nerd, she encourages her best friends to join her in her pursuit of high school coolness. But friends, family, and her own feelings stand in the way. Tennis star John McEnroe narrates, As Himself, occasionally substituted by other celebrity lemony narratorsnote Andy Samberg and Gigi Hadid for the shows' spotlight episodes.

Single-character tropes go to the Characters sheet. Beware of spoilers!

Never Have I Ever provides examples of: