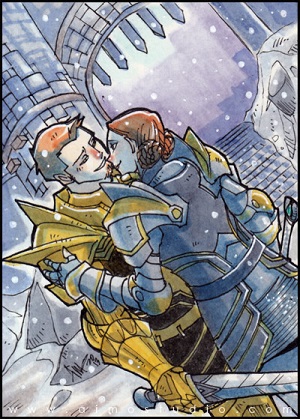 , used with permission
Shadow and Rose

is what happened when Lady Norbert decided to tell the story of Dragon Age: Origins from a different point of view. Because this is a narrative of the events during and after the game, there are spoilers here.
Advertisement:

Alistair, bastard half-brother of King Cailan of Ferelden, records his thoughts and experiences beginning with his becoming a Grey Warden. The story utilizes the Human Female Noble origin, thus introducing Alistair to the Lady Elissa Cousland, with whom he falls in love.

The entirety of Origins is laid out in the narrative, including all of the additional DLC campaigns (e.g. Warden's Keep) which can be played during the course of the adventure. Party banter is expanded on to create greater relationships between the non-player characters, and while some parts of the actual game are truncated for the sake of the narrative, others are fleshed out. An effort is made to incorporate the Dragon Age franchise as a whole, including references to the novels and a comic strip authorized by David Gaider of a deleted scene from the game.

Tropes present in this fanfic include: