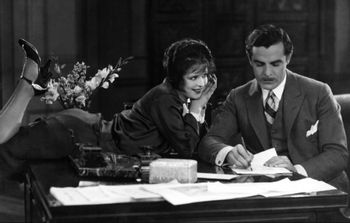 Bow plays Betty Lou Spence, a shopgirl at Waltham's, "the world's largest store", in New York City. Like many of the shopgirls at Waltham's, she's attracted to the handsome young heir to the business, Cyrus Waltham Jr. Betty gets a break when Cyrus's dimwitted friend Monty notices her and asks her out. Betty isn't interested in Monty but she uses him to get introduced to Cyrus, and soon Cyrus and Betty are in love. In the meantime, Betty is providing a place to stay for her sickly friend Molly and Molly's out-of-wedlock baby. Monty gets the mistaken impression that the baby is Betty's, leading Cyrus and Betty to break up. When Betty finds out that Cyrus broke up with her because he thought she was an unwed mother, she decides to make him fall in love with her again in order to break his heart.

It was loosely inspired by an article by romance novelist Elinor Glyn, who rather vaguely defined the concept of "it" as self-confidence and magnetism that attracts other people. The movie was a big hit for Paramount and made Clara Bow a big star, who was actually called the "It Girl". It was selected for the National Film Registry.

A young Gary Cooper can be seen around the 40 minute mark as a reporter.

Not to be confused with It! The Terror from Beyond Space, nor with the Stephen King horror novel or its adaptations.