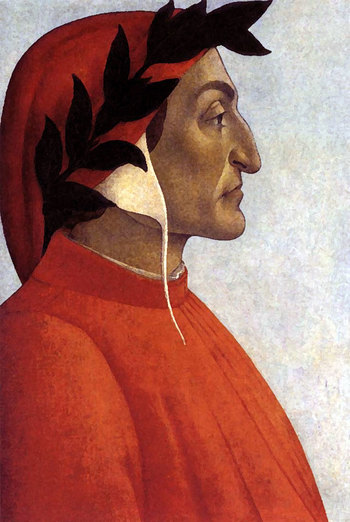 "I am not Aeneas, I am not St Paul:
No one, not even me, thinks me worthy of this journey."
— Dante, Inferno II:ll.32-3
Advertisement:

Durante di Alighiero degli Alighieri (c.1265-1321), known as Dante, was an Italian poet, principally known for writing The Divine Comedy. Born in Florence to a family of minor nobility, Dante spent the first half of his life involved in the politics of Florence, rising to one of the Priors of the city in 1300. After his exile from the city in 1302, however, Dante turned to writing in response to the political strife which plagued Italy.

The Commedia (1308-21) occupied most of his later life, and it is on this that Dante has gained his reputation as the greatest poet in the Italian language, though he was also famous for his earlier poems, some of which have survived in various collections, and others of which are known only by references to them, by Dante and others. Much of Dante's poetry was focused on Beatrice, whom he claims to have only met twice, at the ages of nine and eighteen. Like Petrarch's Laura, however, this was as much of a conceit of Courtly Love as a real love, though what actually happened can never be known. Despite his life-long idolisation of Beatrice, Dante was married, to Gemma Donati, and had children. None are mentioned in any of Dante's writings.

Dante in exile was deeply concerned with the progress of Emperor Henry VII and his doomed struggle with the Papacy and Italian towns. Dante hoped that Henry would help restore him and his faction to Florence; after Henry's early death, Dante became ever more disillusioned with politics, and lost hope of ever returning to Florence. Extremely proud, he even refused an offer of amnesty due to it requiring an admission of guilt, which he would not accept. After nearly twenty years of exile, Dante died of malaria in Ravenna. The city of Florence has sought the return of his body almost ever since.

Trope Namer for Word of Dante.

His works include, but are not limited to:

He's featured in the following media: