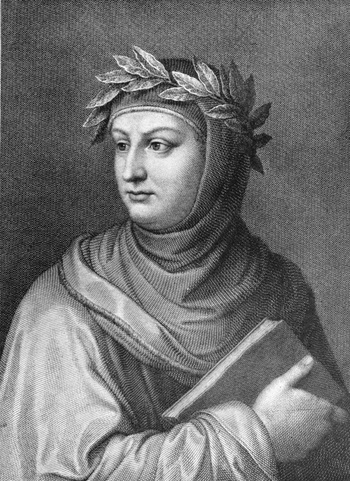 He is best known for Il Decamerone, a collection of one hundred short stories told by three young men and seven young women who fled Florence for fear of the Black Death. The ten retreat to a country villa and decide to amuse themselves by telling stories. A king or queen is selected each day and sets a theme, which all ten must follow, except one man who is such a funny storyteller he receives the privilege of always speaking last and choosing his own theme if he thinks the day's theme has gotten too monotonous.

The stories generally dwell on the fickleness of Fortune, the supremacy of love, and the knavery of men. The corruptions, lusts, cupidity, and stupidity of merchants, clergy, and nobility are all exposed in the hundred tales. Those who read The Canterbury Tales will notice that a number of tales have been transposed wholesale from Italy to England, either by direct borrowing or working from a common source. Shakespeare also borrowed a few tales and expanded them into plays.

The tales of The Decameron are frequently bawdy, and a Values Dissonance may result in a good deal of Squick since the average age of his female characters seems to be somewhere around sixteen or less. Nevertheless an incredibly good—and hilarious—writer, even after nearly seven hundred years and in translation, who never passed up an opportunity to crack a joke and was quite fond of (often ribald) Self-Deprecation.

Of the generation immediately following Dante Alighieri's, he is widely seen as a precursor of The Renaissance. However, he is also in a unique position: his life having overlapped with Dante's, he was uniquely positioned to write a biography of the great poet (his Life of Dante, which is still in print and widely-read) and a commentary/explication of the Comedy. Also, despite his great admiration for Dante, he frequently criticized Dante for being too emotional and spiritual; as one might have guessed based on the differences between the Decameron and the Comedy, Boccaccio was more interested in the good life here on Earth than the complexities of theology. Foreshadowing the Renaissance, he was quite obsessed with the Ancient Greeks and Romans, and wrote a incredibly gigantic catalogue of Classical Mythology for the purpose of edifying fellow Italian writers.