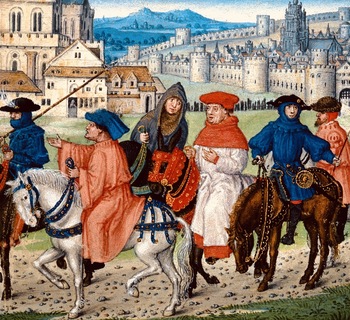 "Are we there yet?"
"I know a shortcut!"
"My saddle chafes."
"If I tell you a story, will you all shut up?!"
"Whan that Aprille with his shoures soote,
The droghte of Marche hath perced to the roote,
And bathed every veyne in swich licour,
Of which vertu engendred is the flour;
Whan Zephirus eek with his swete breeth
Inspired hath in every holt and heeth
The tendre croppes, and the yonge sonne
Hath in the Ram his halfe cours y-ronne
And smale fowles maken melodye,
That slepen al the night with open ye,
So priketh hem nature in hir corages:
Than longen folk to goon on pilgrimages,
And palmers for to seken straunge strondes,
To ferne halwes, couthe in sondry londes;
And specially, from every shires ende
Of Engelond, to Caunterbury they wende,
The holy blisful martir for to seke,
That hem hath holpen, whan that they were seke."
— Geoffrey Chaucer, opening to the General Prologue
Advertisement:

The Canterbury Tales is a collection of twenty-four short stories, written in Late Middle English by Geoffrey Chaucer in the late 14th century and ostensibly told by a group of travelers on a pilgrimage from London to Canterbury Cathedral and the tomb of St. Thomas Becket.note Same guy who was murdered in T. S. Eliot's Murder in the Cathedral, and also the target of Henry II's possibly apocryphal cry, "Will no one rid me of this meddlesome [or turbulent] priest?" To help pass the time during what was then a journey of several days, the pilgrims decide to hold a storytelling contest, in which each pilgrim will share two tales on the journey to Canterbury and two more on the return trip. Chaucer originally planned to write 124 tales, but was only able to finish 24 before his death in 1400.

The pilgrims' stories cover a wide variety of genres, from morality plays to romances to bawdy tales with lots of sex and fart jokes.

The tales are often published these days in verse "translations" (or even in prose), but as the excerpt of the opening lines above shows, they are perfectly comprehensible in the original in a good edition with footnotes.

Compare with The Decameron, another Late Medieval collection of stories within a Frame Story involving travel; some of the stories are similar, and indeed many of the stories seem inspired by those in Boccaccio's collection (that said, it appears that Chaucer never directly copied a story; he probably merely read The Decameron while on a diplomatic mission in Italy, and did not have access to a copy when he was writing the Tales).

Hugely, hugely important in the History of English. It was in fact one of the first works of real literature in a language which modern readers can recognize as "English".note As opposed to pre-Conquest works like Beowulf, which are mostly unintelligible to modern English speakers. Along with contemporaneous 14th century works, it marked the re-emergence of English as a literary language after nearly 300 years following the Conquest in which English was the language of the illiterate peasantry. (And of the literate but not literary lower nobility, not that they liked to talk about it.) Chaucer's work is arguably responsible for the adoption of his London dialect as the standard from which modern English developed. The roughly contemporary Sir Gawain and the Green Knight, alliterative blank verse written in a northern dialect and significantly less comprehensible for modern readers, makes a fascinating comparison.

And then they all ate the Nun's Priest. And There Was Much Rejoicing. (Yaaaay)