Literature / The Ghost of Philinnion 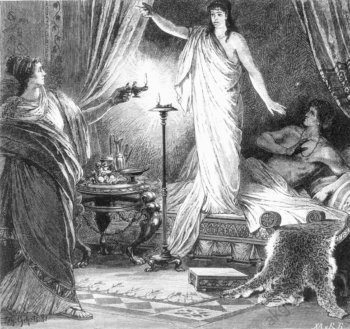 Illustration for "The Bride of Corinth", by Johannes Gehrts (1881)
Advertisement:

"The Ghost of Philinnion" (Φασμα Φιλιννιον) is a ghost story from Ancient Greece, passed around as a "true" story which supposedly took place during the reign of King Philip II of Macedon (father of Alexander the Great).

Philinnion is the beautiful daughter of Demostratos, a citizen of Amphipolis in Macedon. At a young age, she is married to the general Krateros, but unfortunately she dies soon after the wedding, and is buried in the family crypt.

Machates, a young man from Pella, knows nothing of this when he visits Amphipolis and is hosted in the house of Demostratos. Machates has retired for the night when a beautiful girl turns up in his room: She is Philinnion, daughter of Demostratos, who has fallen in love with him and wants to spend the night with him. Machates does not say no.

"The Ghost of Philinnion" is found in the Book of Marvels by Phlegon of Tralles (2nd century CE), although the beginning of the story is missing from the manuscript. A short summary by Proclus (5th century CE) provides some of the missing information, and also hints that the story may have been current in several variants.

The story has been adapted into a ballad as "Die Braut von Korinth" ("The Bride of Corinth"; 1797) by Johann Wolfgang von Goethe. Apart from shifting the scene from Amphipolis to Corinth (and also moving it a few centuries forwards in time), Goethe gave the story an entirely new twist: The girl (no personal names are given) has earlier been promised to the young man, until her parents converted to Christianity, called off the engagement and sent their daughter to a monastery to become a nun.

The tale of Philinnion can be read online here

, as can "The Bride of Corinth" in the original language

and in English translation.

Tropes in "The Ghost of Philinnion":

Tropes in "The Bride of Corinth"

Alternative Title(s): The Bride Of Corinth