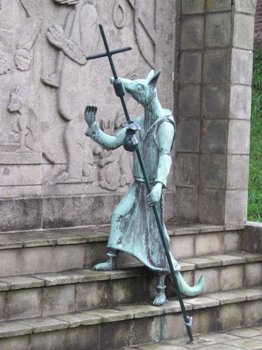 Statue of Reynard in Hulst, the Netherlands.
Advertisement:

Reynard the Fox is a series of French/Belgian/German/Dutch medieval folklore tales about a Karmic Trickster fox named Reynard/Renart/Reineke/Reintje/Reynaert. In all variations of the story Reynard is depicted as a cunning fox who has engaged in so many criminal deeds that the Royal court of King Nobel the lion wants to bring him to justice. He sends out one animal at the time to arrest Reynard and bring him to court, but all attempts go horribly wrong. Bruun the Bear is tricked by Reynard, who tells him there's honey inside a tree. As Bruun peeps inside he gets stuck. Tybeert the cat is also tricked by sending him to a chicken coop, owned by a local priest. Reynard locks Tybeert inside and the noise alarms the priest, who beats Tybeert out. The cat does get his revenge by biting off one of the priest's testicles.

Eventually Reynard's cousin, Grimbeert, a badger, manages to bring Reynard before King Nobel. There the fox once again fools everybody by claiming that Isegrym the wolf, Bruun, Tybeert, Grimbeert and even Reynard's dad have plotted against the king and kept a treasure hidden from him of whom only Reynard knows the hiding place. When the king frees Reynard he will show where it is hidden. Reynard flees and claims to go on pilgrimage to Rome. Cuwart the hare and Belyn the ram go along to his home. He asks Cuwart to come inside with him while Belyn waits outside. Reynard murders the hare, chops his head off and puts it inside a bag he gives to Belyn with the message to bring it to the king. Belyn does so and is executed. By the time everyone realizes they have been fooled again Reynard has already fled.

The stories are interesting because of their satirical content. The feudal system and the power of the Corrupt Church are lampooned.

There have been several adaptations of the story throughout history. We only list the full story adaptations here, not brief shout-outs, parodies or propaganda works.