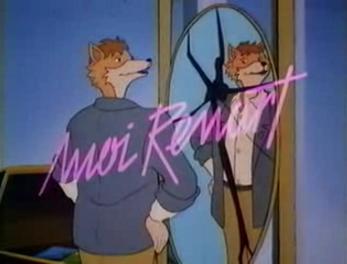 It is a very loose adaptation of Le Roman de Renart, an anthology of satirical tales written in the French Middle Ages. The original stories were about a fox called Renart outwitting other animals as they try to chase food. Those tales were so popular that it even replaced in French vocabulary "goupil" with "renard" (French for fox).

The animated series is set in Paris during The '80s. The characters are practically humans with a Furry Lens. It has a much more comedic tone, and more often than not, Hilarity Ensues.

The plot is about Renart, a cocky and joyful young fox, who goes in Paris and decides to set up an agency where he says he can do any job. He often badgers his greedy and grumpy uncle Ysengrin who is a car salesman, gets in trouble with the law, and tries to seduce beautiful vixen journalist Hermeline.