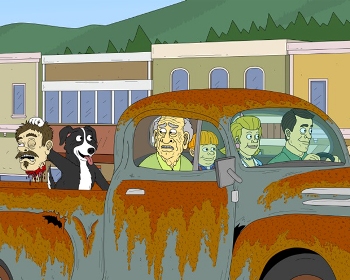 What happens when you cross Satan with an adorable black border collie? You get Mr. Pickles! This show follows the adventures of Tommy Goodman and his loyal but Satanic dog Mr. Pickles as they go on many different adventures throughout Old Town. The only one who's aware of Mr. Pickles true nature is Tommy's Grandfather, who is routinely tormented by the devil dog time and again and is always seen as a crazy old fool by Tommy's mother and father.

Basically, this is what happens when you put Lassie in the modern age, sell her soul to Satan, turn into a dog version of Freddy Krueger and throw in gore, black comedy, a death metal soundtrack, and an art style that looks like a mix between a more cleaned-up version of Superjail! and MAD magazine's more grotesque segments, while evoking as many '50s-style Americana tropes for maximum shock-value.

Following the events of the fourth season premiere, the show has been renamed "Momma Named me Sheriff"