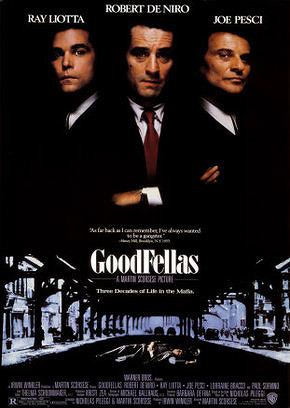 "As far back as I can remember, I always wanted to be a gangster."
— Henry Hill
Advertisement:

Martin Scorsese's 1990 adaptation of the book Wiseguy by Nicholas Pileggi, which followed the story of New York City gangster Henry Hill (Ray Liotta) from his induction into the Lucchese crime family in the 1950s to his downfall and entry into the Witness Protection Program in the 1980s. Along with Henry, the film follows Henry's boss Jimmy Conway (Robert De Niro), his best friend Tommy DeVito (Joe Pesci), and his wife Karen Friedman (Lorraine Bracco). The film details Henry's moving up the ranks, his eventual imprisonment, his role in (at the time) the largest heist in American history, and his involvement with the cocaine trade (which eventually gets him arrested by narcotics officers and shunned by the Mob). As the ground crumbles around him, he turns to the Feds for protection, eventually having to "live the rest of [his] life like a schnook".

The movie became famous for several reasons, including a long tracking shot through the kitchen of the Copacabana; the montage near the end showing Henry's increasing drug-induced paranoia as he tries to run some guns, get a drug shipment off to Pittsburgh, and make dinner for his family; and Tommy's profanity-laden dialogue and Hair-Trigger Temper, which threatened to make Joe Pesci typecast for some time — and won him the Best Supporting Actor Oscar. The movie itself ended up losing Best Picture to Dances with Wolves. The movie was selected for the National Film Registry in 2000.

GoodFellas was followed by Casino, based on the book of the same name (also by Nicholas Pileggi), which also featured De Niro (who 'phagocytated' Liotta's role in becoming the centre of the movie's romantic subplot), Pesci (still the same sort of vicious character - though with more sophisticated and sympathetic qualities; it should also be noted that both guys he played really existed), and Frank Vincent (famously playing a very different role from Goodfellas' Billy Batts).

The film is also considered rather notable for being a major influence on The Sopranos (widely viewed as its Spiritual Successor), which went on to become one of the most acclaimed and influential television series of all time. Multiple cast members in The Sopranos (including Lorraine Bracco, Michael Imperioli, Frank Vincent, Vincent Pastore, and Tony Sirico) previously appeared here, and the show's gritty and unglamorous portrayal of the Mafia was pretty clearly influenced by the film. The parallels between the two were originally going to be even more blatant: HBO originally wanted Ray Liotta and Lorraine Bracco to play Tony and Carmella Soprano, effectively reprising their roles as Henry and Karen Hill; Liotta turned down the role, and Bracco requested the role of Dr. Melfi because she felt that Carmella was too similar to her role in GoodFellas.

Now go home and get your trope folder:

open/close all folders
A-F
"It ain't the first hole I ever dug! Where are the shovels?"
G-L
M-R
S-Y
Feedback

Tommy DeVito gets shot in the head by one of the bosses as retribution for murdering Billy Batts and considering his hateful and psychopathic personality, you can't feel sorry for him.

Tommy DeVito gets shot in the head by one of the bosses as retribution for murdering Billy Batts and considering his hateful and psychopathic personality, you can't feel sorry for him.