Film / The Evidence of the Film 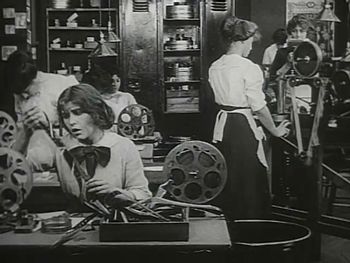 The Evidence of the Film is a short crime drama from 1913. A young woman on the set of a film production company, who works as a film editor, bids goodbye to her little brother, a messenger boy. The boy goes off to the office of a dishonest stockbroker, who has just received a letter from a rich lady demanding he return her $20,000 in bonds.

The stockbroker devises a plan. He has his employees witness him putting the $20K in a sealed envelope. Meanwhile, he stuffs some old newspapers into another envelope, which he also seals. He arranges for the bonds to be sent to the rich lady, then follows the boy and deliberately collides with him on a street corner. The broker quickly switches out the boy's package for his package with the newspaper. When the boy delivers the package and the rich lady opens the envelope, the boy is taken off to jail.

Unfortunately for the broker, he knocked the boy down right in front of a film crew that was shooting out on the street. Even more unfortunately, the boy's sister, working in the editing room, sees the film that proves her little brother is innocent. She takes the film to the judge and has it played for the prosecutor. Her little brother is set free and the broker is exposed.

The Evidence of the Film is of historical interest for its film-within-a-film documentation of how movie making and film editing looked like in 1913. It was selected for placement on the National Film Registry.