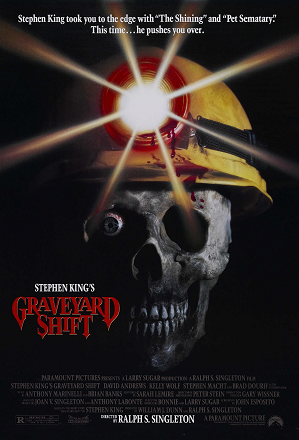 It’s a living... but not for long.
Advertisement:

Graveyard Shift is a 1990 horror film, based on the short story of the same name by Stephen King and starring David Andrews, Brad Dourif, Stephen Macht, and Andrew Divoff.

Drifter John Hall arrives in a flyspeck town and goes to work at the local textile mill, where he discovers a severe rat problem in the basement. Warwick, the mill's disgruntled foreman, isn't willing to do anything about it until it becomes apparent that the mill will close unless the rats are stopped. Following a descent into the cavernous depths of the basement, Hall, Warwick, and other employees are trapped by a collapse, and soon encounter a gigantic, bat-like monster hellbent on devouring them.

Warwick: We're going to Hell... together!