Too Dumb to Live 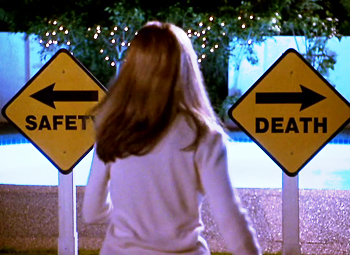 Walking down the alley alone to tell his friend about the Serial Killer in town. Telling everybody in earshot he has vital evidence that he'll be taking to the authorities very shortly. Hovering in a known dangerous area without backup. Not telling the rest of the heroes about the upcoming trap laid out for them. Accepting food and drink from the somewhat weird stranger who lives in the seemingly abandoned house in the middle of nowhere and keeps asking odd questions in a Creepy Monotone, such as if they came to the house alone and if anybody knows where they are (and, of course, answering "yes" and "no" to these questions). Bullying a Dragon, Mugging the Monster, or whatever. Touching buttons when told not to. Juggling Loaded Guns. Plugging in electric appliances right next to their full bath. Refusing to believe his glory days are behind him. Blackmailing someone about murder. Not only possessing Genre Blindness, but putting Zaphod Beeblebrox's Peril-Sensitive Sunglasses on over it. Even close friends have to facepalm upon hearing of his or her exploits. Who Would Be Stupid Enough? These people, that's who!

Compare Artificial Stupidity, the video game equivalent of this which is a result of AI rather than the script being against them. Contrast Death by Pragmatism and Let's Get Dangerous!. Not to be confused with Evilutionary Biologist or The Social Darwinist, although they generally consider it a Moral Event Horizon to not kill the dumb. See also Suicidal Overconfidence, another video game version. Lethally Stupid is when someone's stupidity simply causes havoc, instead of being the cause of their demise.

For Real Life examples, see the Darwin Awards and What the Fuck Is Wrong with You?

Caitlin, in what universe could that possibly be a good idea?!

Caitlin, in what universe could that possibly be a good idea?!