Too Hungry to Be Polite 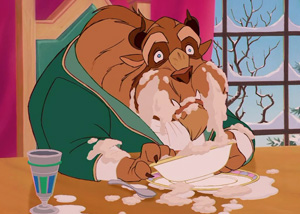 Spoon, darling. Use the damn spoon. It's right there. Use it.
"First you must feed us, and then we'll all behave."
— Threepenny Opera, "What Keeps a Man Alive?"

Not everyone has had the fortune to grow up in an environment where there was enough time and opportunity available to learn proper dining etiquette. Such folks may shock others when they sit down to eat.

Sometimes Played for Laughs if the work in question is poking fun at the character for their table manners. Comical examples might be accompanied by Buzzsaw Jaw. May be a case of Values Dissonance, as dining etiquette varies from culture to culture.

May overlap with Raised by Wolves and My Instincts Are Showing. May also overlap with Big Eater, but this trope does not necessarily require that the character eat a lot. May be a trait of one with One-Track-Minded Hunger. Compare Jabba Table Manners, which is similar to this trope, but uses bad table manners to demonstrate that a (usually rich and villainous) character is overly gluttonous. This trope involves less moral judgment. Also compare Too Desperate to Be Picky, and Bratty Food Demand.