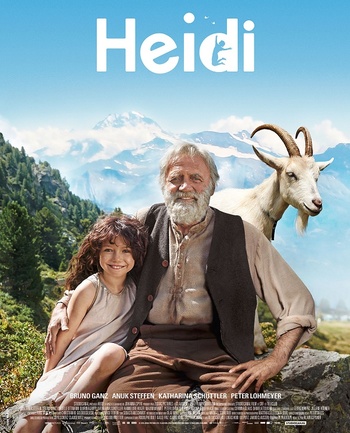 Heidi is a 2015 Swiss-German film directed by Alain Gsponer. It is an adaptation of the seminal Swiss novel Heidi by Johanna Spyri.

After living for several years with her Aunt Dete, young orphan Heidi is brought to live in the Swiss Alps with her elderly grandfather Alpöhi. Despite being known as a grumpy hermit, he soon learns to love Heidi. She quickly makes friends with goatherd Peter, a boy just a little older than her. For the next few years, Heidi grows up happy with her grandfather and Peter, until Dete returns and snatches her away and takes her to Frankfurt. There she has troubles adjusting to city life, but ends up befriending Klara, a young disabled girl.