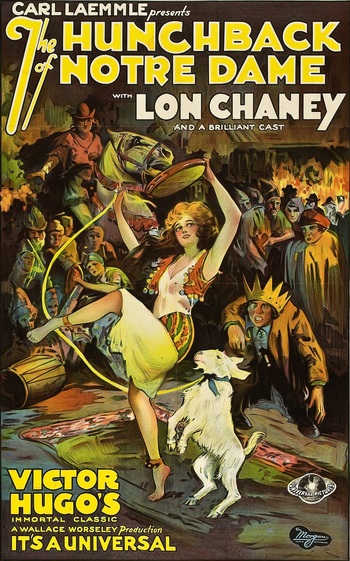 The Hunchback of Notre Dame is an American 1923 silent film based on the Victor Hugo novel by the same name. It was produced by Universal and starred Lon Chaney as Quasimodo.

The story follows the original novel insofar as Esmeralda is the focus, and Quasimodo is only a supporting character.note Hugo's novel was called Notre-Dame de Paris in the original French, and the English title overstates Quasimodo's importance. The main changes to the plot involve reworking the story into a typical Hollywood romance, with Phoebus and Esmeralda as our leading man and woman. Unlike in the novel, they get a happy ending. This may also be the first adaptation in which Claude Frollo is turned into a Decomposite Character to avoid portraying a priest as the villain. In this version, Frollo's negative traits are given to his brother Jehan.

This film is considered to have launched the Universal Horror franchise, notwithstanding that it is one of the franchise's titles that isn't actually horror. Notably, Quasimodo never appeared in any subsequent Universal films, the 1939 version being a production of RKO Pictures. Even so, this film's status as part of the classic horror canon is the reason Quasimodo is occasionally counted as part of the Monster Mash.

In 1951, the film entered the Public Domain due to Universal failing to renew the copyright.