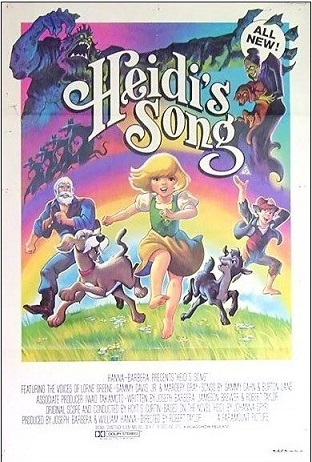 Heidi's Song is a 1982 Animated Musical produced by Hanna-Barbera based on the novel Heidi by Johanna Spyri. It was directed by veteran H-B animator Robert Taylor, with the screenplay by Taylor, Joseph Barbera and Jameson Brewer, and is one of only three animated features Hanna-Barbera made that did not feature their trademark characters (the other two being Charlotte's Web and Once Upon a Forest).note C.H.O.M.P.S., a live-action comedy from 1979, is their only other theatrical production not to feature pre-established characters.

Like the book, the film tells the story of an orphaned girl named Heidi (Margery Gray) who is taken to live with her grandfather by her Aunt Dete. Heidi's grandfather (Lorne Green) initially dislikes having Heidi around because she interferes in his routine. But when her grandfather hurts his leg, Heidi helps nurse him back to health, and the two begin to bond. But all is not well when Aunt Dete (Virginia Gregg) arrives to take Heidi away again, saying that a wealthy family in Frankfurt, Germany, wants Heidi to come live with them...

The film was received well enough but never garnered the attention or praise that Charlotte's Web did. While Paramount distributed the film during its theatrical run and VHS releases, this film is part of the Hanna-Barbera librarynote In other words, it's owned by Turner Entertainment, unlike the other three movies, which are owned by Paramount (Charlotte's Web), MGM (C.H.O.M.P.S.; originally released by American International Pictures, which eventually ended up as part of Orion), and Walt Disney Studios (Once Upon a Forest was a 20th Century Fox release)., with Warner Bros.note Parent company of Turner Entertainment. eventually releasing the film to DVD for the first time in 2012 through the Warner Archive.

Do not confuse with Heidi, Girl of the Alps which is based on the same novel but is a different work.

"As you go down the third time, they'll admit
That's What Friends Are For."

Rottenheimer and Sebastian bully Heidi through song, accompanied by a Disney Acid Sequence of them turning into monsters.

Rottenheimer and Sebastian bully Heidi through song, accompanied by a Disney Acid Sequence of them turning into monsters.