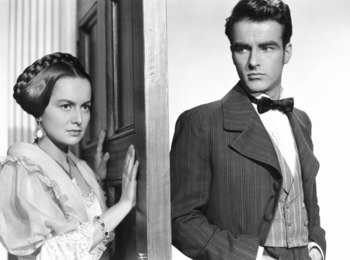 Charming, clever, cultured... what is he doing with her?
Advertisement:

The Heiress is a 1949 drama film directed by William Wyler, adapted from the 1947 play of the same name by Ruth and Augustus Goetz, which in turn is an adaptation of the 1880 novel Washington Square by Henry James.

In mid-19th century New York, Catherine Sloper (Olivia de Havilland) is a cripplingly shy woman who lives with her widowed father, Dr. Austin Sloper (Ralph Richardson), and his flighty sister, Lavinia Penniman (Miriam Hopkins). As she's viewed by everyone as lacking personality, it's a big surprise when handsome, charming Morris Townsend (Montgomery Clift) takes an interest in her. Her aunt is in favor of the match, but Dr. Sloper is opposed, believing that Morris couldn't possibly be interested in Catherine for herself and must be after her inheritance.