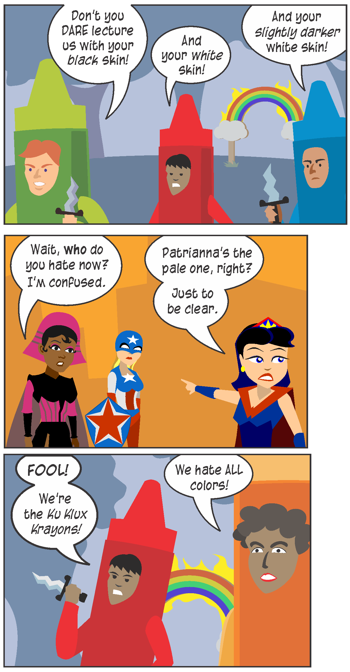 The social version of A Million Is a Statistic. May be used as an Anti-Hero trait in cases like Noble Bigot with a Badge.

This can be Truth in Television. The term for this kind of person is "misanthrope", they usually manage to function within society and can form normal relationships with other humans. Indeed, it's considered an asset for humorists. It's still possible to hate one person slightly less than everybody else and be this. It's also possible to have a particular set of people you hate more than all the others, but for preference that group should also be very general.

Cynics may say that only a truly despairing person would hate all of humanity, and that people who claim to embody this trope actually subscribe to one of the more unpalatable types of hatred and are trying to mask it. (See also At Least I Admit It, where the willingness to admit pettiness and/or bias is thought of as courageous.) Regardless, although it might not be worse than bigotry, it's hard to argue that mistreating all people should be considered better than mistreating a particular subset thereof.