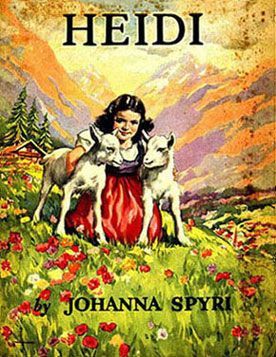 Heidi, published 1880 in two parts named in full Heidi's Years of Learning and Travelnote Orig.: Heidi's Lehr- und Wanderjahre and Heidi Makes Use of What She has Learnednote Orig.: Heidi kann brauchen, was es gelernt hat, is a novel by Swiss author Johanna Spyri.

Heidi, defined by its author as a book "for children and those who love children", quickly became a classic of Children's Literature and is still one of the world's most popular books for children. Possibly it is also the internationally best known work of Swiss literature.

The novel's eponymous heroine is an orphaned Swiss girl who, at the age of five and out of necessity, is given by her Aunt Dete into the care of her grumpy grandfather, who lives as a recluse in the Swiss Alps. The grandfather, an embittered man commonly known as the Alp-Öhi, is not at all happy about this, but eventually Heidi's blithe spirit thaws the old man's heart. But the happiness of the two is not to last, when Aunt Dete, having found employment in Frankfurt, returns to take Heidi with her to the city.

In Frankfurt, Heidi pines for the Alps, but she also finds a friend in Klara, the delicate daughter of Aunt Dete's employer, Herr Sesemann. When Heidi's health begins to suffer, she and Klara both return to the mountains, where clean air, sunshine, and friendship work a minor miracle.

Some of the numerous adaptations:
Advertisement: