Western Animation / Herself the Elf 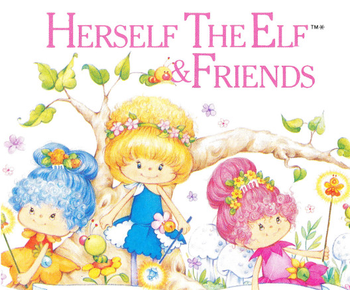 Herself the Elf (middle) and friends
Advertisement:

Herself the Elf was a girl-oriented franchise from the early 1980s created by Those Characters From Cleveland. Starting life as a character on greeting cards, Herself became popular enough to get toys, records, books, and a cartoon special produced by Nelvana, which featured Judy Collins on music. Herself the Elf and her elfin friends are protectors and guardians of nature, using their magic wands to attend to every detail of our world.

The cartoon special, The Special Magic of Herself the Elf, followed the evil Thorn and his daughter, Creeping Ivy, who want nothing more than to take Herself's magic wand and ruin nature. They quickly capture Herself and take the wand, but it won't work in the hands of a stranger for a year and a day. One year later, time's almost up, and Herself's friends join with Wilfie the wood sprite to find Herself and retrieve her wand before everything is ruined.

A reboot cartoon was announced

The special contains examples of: