Painting the Frost on Windows 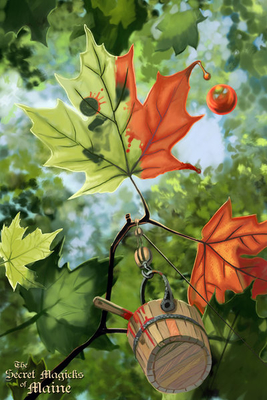 Used with permission.
Phoenix: What's her problem, Twilight? She can't honestly think someone can control weather. It's ludicrous!
Trixie: You have to be the biggest imbecile Trixie has ever laid eyes on!
Judge: Mr. Wright... That's a Pegasus's job here in Equestria. It's... sort of what they do.
Phoenix: Mmmph... uh... what...?
— Turnabout Storm

Ever wonder why the leaves turn color in fall, or why frost appears on the window during the wintertime? It's not due to any sort of natural process.

Usually appearing in mythology or children's entertainment, this is a character who is responsible for the beautiful colors and patterns we see in nature. The leaves? There's some guy going around and painting them one by one. The frost? Someone such as Jack Frost draws it on people's windows. A character of this trope is usually depicted as an artist; their medium just happens to be nature.

Can be a subset of The Fair Folk, Odd Job Gods, Magical Underpinnings of Reality or Anthropomorphic Personification. For similar abilities without the responsiblity see Power of the Storm and Green Thumb. Compare Peeve Goblins, which are responsible for annoyances or ills rather than changes in nature.

Cloud Princesses Rose, Blush and Lilac of Cloud Kingdom have the job of painting the sunrise and sunset.

Cloud Princesses Rose, Blush and Lilac of Cloud Kingdom have the job of painting the sunrise and sunset.