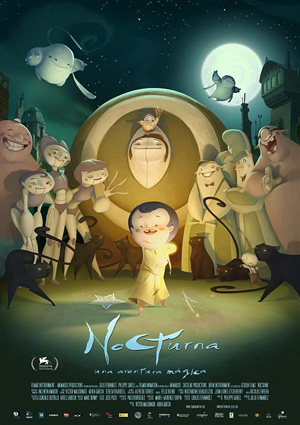 Nocturna is a French/Spanish (but produced in English) 2007 traditionally-animated fantasy film. The film was produced by Filmax Animation.

In the aging orphanage the days pass very uneventfully, but the nights are something quite different; at least for Tim they are. The light reflected from the stars is the only cure for his fear of the dark. One night this fear leads him to the orphanage rooftop. Where he discovers that his favorite star has disappeared, and unfortunately it's not going to be the last one. Tim also discovers a peculiar character that goes by the name of the Cat Shepherd; together with his faithful cat Tobermory, that will become Tim's personal guardian, the Shepherd is in charge of making children sleep peacefully.

But Tim is not about to go to bed. He needs his star more than anything in the world, and will do what it takes to see it shine in the night sky once again. Tim convinces the Shepherd to take him to see Moka, the guardian of the night within the Night World, and pleads for him to return the stars to the night sky. Moka pays scarce attention to the boys pleas, so Tim asks the Cat Shepherd to take him to the Lighthouse of the Stars, where he thinks he may find the answer to the strange phenomena. Tim, the Shepherd, and Tobermory race against the clock through the streets of Nocturna, a world in which hundreds of the most diverse creatures work to create the night as we all know it. Little by little our friends will discover something strange is happening. An ominous threat is putting in danger the night and the inhabitants of Nocturna, and Tim is unknowingly the one behind it all.

The film was eventually released in the United States on Blu-Ray and DVD by GKIDS Films.

No relation to the horror game Nocturne (1999). Or the other Nocturne, which is a freeware RPG that was released in 2002.

This animated film provies examples of: