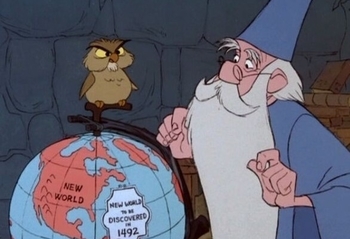 The laws of sorcery absolutely require that you don't have allergies.
"Well, there isn't really ONE big reason, but a lot of good reasons. First, your familiar isn't just a pet; she's your ally. She's the best friend that I've ever had, and that I'm ever likely TO have. She listens to me, and tells me when my head is up my- er- when I'm playing silly head games with myself. She can see invisible beings and forces, even when I'm not looking for them, so she watches my back. And heterodyning your magical power with an ally never hurts. And Boots gets... Hey, what DO you get out of it, Boots?" Boots answered by sprawling on her back to allow her tummy to get rubbed. "Oh. Right. That."
— Foxfire, explaining why wizards have familiars, in the Whateley Universe, 'Boston Brawl II'

A familiar is a creature that has been magically bound to a person in a master-and-servant type of relationship. The actual type of familiar varies greatly; it is typically a small animal (such as a witch's cat) but can be anything, including demons or even human beings. Similarly, the type of bond can vary: in some cases, it is nothing more than the ability to understand what the familiar says (if it speaks) while in others the familiar is the source of the character's powers. But there must be a specific bond; just having a magical creature as a companion doesn't count. The "master" need not be a sorcerer, either — many stories have a normal person gain a familiar by accident, often resulting in trouble.

This is based on the medieval belief that Satan granted demon servants (in animal form) to witches as part of their pacts and that "cunning folk" (white witches, herbalists, folk healers) were assisted by good spirits. The idea has since evolved greatly in Fantasy fiction, and even some Science Fiction settings have similar concepts (telepathic pets, for example, or even a Robot Buddy, especially if animal-like). Compare Bond Creatures, Empathy Pet, Mons, and Right-Hand Cat. The familiar usually acts as an Animal Eye Spy to their master.

Because All Witches Have Cats, cats, and especially black ones, are the most common variant for female magic users. Frogs and toads, bats, owls, small imps, and sometimes snakes are also very common. In theory, however, a familiar can be just about anything.

Today, most witches draw a distinction between a "familiar spirit", which is more like your "personal demon/daimon", and an animal "familiar" which is an animal you bond with. Sometimes the term refers to your own alter ego behaving independently; your Shadow Archetype self. In any case, the "familiar" is so called because it stands in a close personal connection to you.

One possible subversion of this trope is for a wizard to (intentionally or accidentally) form a familiar bond with a human being, usually causing hilarity to ensue.