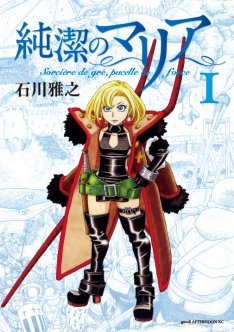 Maria the Virgin Witch (純潔のマリア Junketsu no Maria, lit. "Maria the Virgin"), is a Seinen manga series written and illustrated by Masayuki Ishikawa. It was serialized in Kodansha's Good! Afternoon magazine from 2008 to 2013, and compiled into three volumes. An anime adaptation by Production I.G and under the direction of Goro Taniguchi (of Scryed and Code Geass fame) premiered on January 2015, and is currently available for streaming on Funimation's site

Set in France during the Hundred Years War, it follows Maria, who is one of the most powerful witches of her era. She hates conflict and does anything in her power to prevent any more fighting. This attracts the ire of the Heavens, who give her an ultimatum - the moment she loses her virginity, her magic will be gone as well.