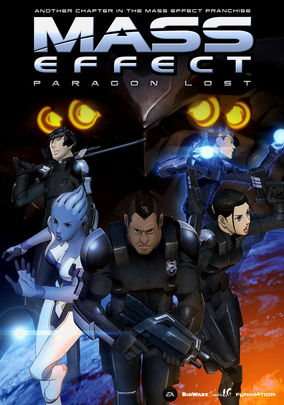 “Do you think I made the wrong decision?”
Advertisement:

Mass Effect: Paragon Lost is an animated movie set during the events of Mass Effect 2. Produced by Funimation and animated by Production I.G, it was released on November 28, 2012. A nine-minute sneak peek of the movie was uploaded Funimation's YouTube channel on October 25, 2012, and can be accessed here

The movie stars James Vega, a lieutenant in the Alliance Marines. After his squad rescues a small colony from krogan pirates, Vega and his team spend the next two years protecting it from harm. However, when a strange piece of unknown technology summons the Collectors, Vega and his allies must fight for their lives and try their best to escape their invasion.