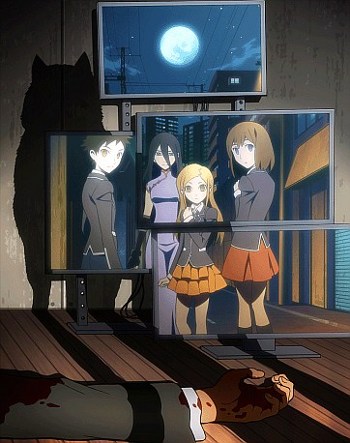 Loups=Garous The Motion Picture is a 2010 Post Cyber Punk anime movie directed by Junichi Fujisaku, based on a book by Natsuhiko Kyogoku. It is set in a world 20 Minutes into the Future, where everyone is constantly watched by an omnipresent surveillance system and mostly communicate online. Children are educated online, so schools are replaced by Community Centers that teach them how to socialise.

The story's protagonists are three girls assigned as a group and an unregistered citizen: shy and quiet Hazuki Makino, energetic Mio Tsuzuki, emotionless Ayumi Kouno and Action Girl Myao. A series of brutal murders occurs within the neighbourhood. As Yuko Yabe, the fourth member of the assigned group and a old-times anime fan, nearly becomes one of the victims, the girls come together to protect her and gradually develop a genuine friendship. However, the murderer keeps hunting them, easily manipulating police and the whole surveillance system. To survive, they have to uncover the truth behind the society's façade.