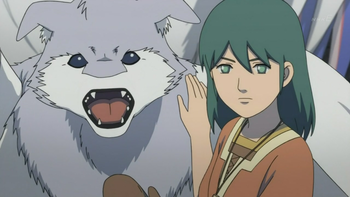 Left to right: Leelan and Elin.
The Divine Kingdom of Lyoza is divided into two territories ruled by the Yojeh (or "True Ruler") and the Aluhan (or "Grand Duke"), who are in charge of the political and military aspects of the country. In Aluhan territory, there is a village that raises Toda, the beasts that allow the country to maintain military supremacy over its neighbors. In that village lives a beast doctor named Sohyon, who is allowed to care for the Toda even though she comes from the Ahlyo, a nomadic tribe with green eyes said to have magic, because her late husband was the son of the village chief and she happens to be good at her job. Her ten-year-old daughter, Elin, like so many other girls her age, takes an interest in the Toda and decides that she wants to follow in her mother's footsteps, so Sohyon starts to teach her about the Toda, and in the process discovers that Elin is amazingly talented.
Advertisement:

The Beast Player started out as a two-volume novel by Nahoko Uehashi, but her participation in the creation of the Animated Adaptation by Production I.G and Trans Arts inspired her to write a sequel and a collection of spin-off stories. Two months before the anime began airing on January 10, 2009, a Comic-Book Adaptation by Itoe Takemoto ran in Monthly Shōnen Sirius until January 26, 2016.

The anime can be streamed legally in its entirety on Crunchyroll under the title of Erin.

Pushkin Children's Books and Henry Holt and Co. published the original novel and the sequel in English, the latter retitled The Beast Warrior.