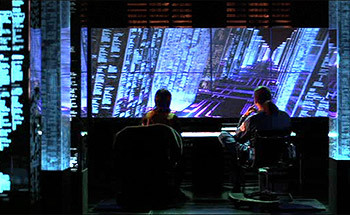 "We got one person on-line but with the workload of 10 users. l think we got a hacker."
"Since I'm such an advanced computer, I can make Pegasus's computer systems look like a really boring video game!"
— Computer, Yu-Gi-Oh! The Abridged Series
Advertisement:

The opposite of Our Graphics Will Suck in the Future is Extreme Graphical Representation, where every operation that takes place in the computer is represented by flashy, often "futuristic" animations on the screen. These fantastic light shows have no connection to whatever might be taking place, and real computer professionals invariably find them impractical and implausible. Does anyone seriously think that a computer has to flash a picture of each fingerprint in the database on its screen while it's searching for a match?

This is due to the Rule of Perception: To humans, movement means activity. Lack of movement means it's inactive - dead. So if it doesn't look like the piece of gee-whiz technology is doing something, we don't believe it is doing anything. Thus, an Extreme Graphical Representation will almost always involve some kind of visible activity — whether it's obvious or subtle. And since it's just a prop, the activity usually isn't related to anything at all.

This is Truth in Television as many home computers have blinking lights on them, mostly around the 'on' switch. And verbose modes and system monitors are bound to be used more than is really necessary. That way if neither disk light blinks nor progress bar moves, the user can confirm the growing suspicion that the program quietly hung five minutes ago and they're just sitting there, waiting for nothing. Modern user interface design explicitly states humans need these kinds of cues. Also, routers and such have tons of blinking lights on them, usually corresponding to a code for what the device is doing and any errors that might pop up. The same goes for the system beeps when you start up your computer, which tell the user that their PC is indeed starting up correctly, without any circuitry issues or other problems like dead RAM or a misbehaving graphics card. In the tech world, this is known as Posting, or Power On Self Test.

Not to confuse with the other kind of "graphic" representation.