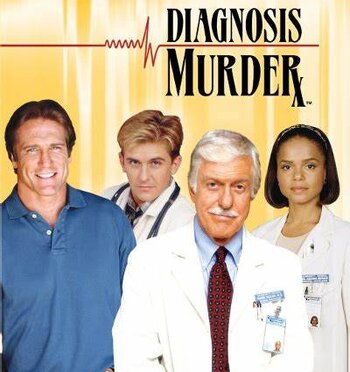 "Diagnosis: Murder is a mystery/medical/crime drama television series (1993-2001) starring Dick Van Dyke as Dr. Mark Sloan, a medical doctor who solves crimes with the help of his son, a homicide detective played by his real-life son Barry Van Dyke."

That's directly from The Other Wiki and is probably one of the best explanations of the show. (The Van Dyke Family roadshow perhaps? Given that Dick's daughter also appears as Mark's daughter and all four of Barry's children turn up in the series and Dick's brother turns up as Mark's brother...)

In between saving people's lives, Mark as the chief of internal medicine also finds time to help the woefully inadequate LAPD find the constant murders that have been going around lately. The whole idea is that a patient will come in comatose under the reasoning that a landslide had knocked them out and caused internal bleeding so they died, yet under closer inspection these "rock bruises" look more like the shape you would expect after been repeatedly hit by heavy books. Steve, this man wasn't killed by rocks on a landslide but by books in a library; my diagnosis, murder.

It's woefully ridiculous but the fact that the show knows it's a stupid idea and pokes a lot of fun at itself just makes it that much more appealing. Mark doesn't solve the crimes by himself; Steve, Mark's son mentioned above, gives him reason to poke around. Also, depending on the season, he has doctors Amanda Bentley, Jack Stewart and Jesse Travis. The latter opens up a BBQ restaurant with the policeman Steve. So Amanda and Jack/Jesse will then get themselves into random danger with the killer while trying to solve the murder because clearly being highly trained doctors with lives to save isn't enough to keep them occupied and they don't have the brains to ask their police friend, Steve, to look into it for them.

It's not commonly known that this was a spinoff of

Jake and the Fatman (which in turn was a spinoff of Matlock... which is also linked to Mannix and Murder, She Wrote and Magnum, P.I. by extension... yeah, there's a lot of siblings in this family).

Now with a Recap Page, that will need some work.