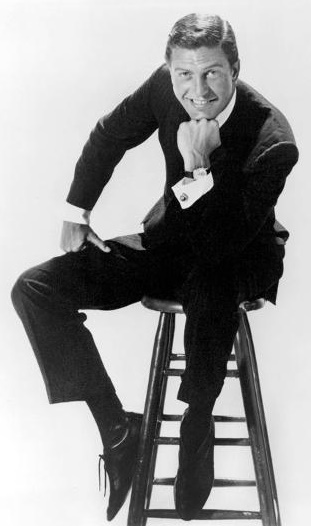 "I never wanted to be an actor, and to this day I don't. I can't get a handle on it. An actor wants to become someone else. I am a song-and-dance man, and I enjoy being myself, which is all I can do."
Advertisement:

Richard Wayne Van Dyke (born December 13, 1925) is an American comedian, actor, writer and producer who has worked on stage, screen and television.

Born in West Plains, Missouri and raised in Danville, Illinois, Van Dyke enlisted in the U.S. Army Air Forces during World War II and was made a radio announcer; he continued working in radio after the war, as well as in nightclubs and on television. His Broadway debut came in 1959, and he soon landed the role of Albert Peterson in Bye Bye Birdie, for which he won a Tony Award. This role, in turn, brought him to Hollywood when a film adaptation of the play was made. The remainder of his career has been in movies and television.

Van Dyke is best known on television for The Dick Van Dyke Show and Diagnosis: Murder. In film, he is fondly remembered for his roles in Mary Poppins and Chitty Chitty Bang Bang. He also had a couple of voice roles for Hanna-Barbera, in an episode of The New Scooby-Doo Movies and the Christmas Special The Town Santa Forgot. He appeared in a series 4 episode of Columbo where he murdered his wife, and played an important role in the first Night at the Museum.

Now in his 90s, the only things that have managed to slow him down are a lingering hip injury and the COVID-19 pandemic. Even then, he continues to perform a regular cabaret act in Los Angeles-area nightclubs.

Outside of entertainment, he is a computer enthusiast and was a major supporter of Amiga during its existence. He even used his own personal equipment to do visual-effects work for Diagnosis: Murder.