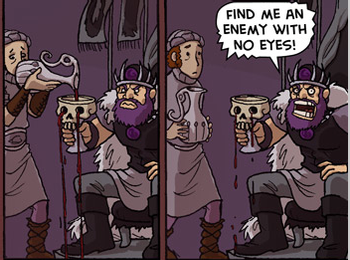 "Bring me a mop made from the hair of an enemy!"
"Now for our national beverage, apple brandy drunk from the skulls of our enemies! It's a very heady liquor."
— Timeandahaf, Asterix, Asterix and the Normans
Advertisement:

When a fierce, trophy-collecting warrior wants to be practical, he won't just make the remains of his enemies into a fetish. He'll make them into something useful. Like a cup.

If you want to make somebody threatening or as a sure sign of villainy, this is a way to suggest that a person is so cold they are unaffected by drinking from the remains of their dead enemies, as well as it being a grand form of humiliation and a warning to other foes. The use of someone's skull as such may also be a threat used during a Badass Boast.

The beverage in question may be blood, but is typically wine or some sort of elixir that may necessarily need to be imbibed from an enemy's skull. Other situations in which this trope commonly occurs include proposing a toast to the defeat of the enemy in question or intentionally wrong Shakespeare parodies.

Drinking or eating brains from a skull is a different thing. Compare Creepy Souvenir.