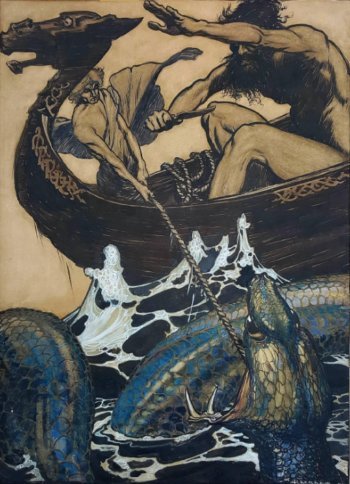 Thor fishes up the Midgard Serpent, as told in "Hymiskvida". Illustration by Arthur Rackham (1901)
Advertisement:

One of the two works referred to as Eddas, the Poetic Edda is actually not a single, fixed work, but a collective term for poetry on stories and themes from Norse mythology as found in old Icelandic manuscripts. The bulk of these poems, however, is contained in a single manuscript, the Codex Regius, a work first compiled c. 1230 CE (though the only exemplar we have was created c. 1270 CE). The poems themselves are thought to date from various points between the 10th and 13th century. The exact dating of individual poems has always been subject to debate.

For the history and meaning of the name Edda, see The Eddas.

A compilation of ballads, interspersed with a few prose passages to provide context. The unknown compiler of the book grouped the ballads thematically and thus the book can be divided into two parts, the mythological and the heroic.

The mythological part begins with "Voluspa" ("The Seeress’ Prophecy"), probably the most quoted part of the Poetic Edda. It tells the story of the creation of the world as well as that of its impending cataclysm, the Ragnarok ("fate of the gods"), in which Odin and most of the gods are destined to perish.

Other poems are much more light-hearted, especially those dealing with the comedic (mis)adventures of Thor, such as when he is disguised as Freyja and sent to Jotunheim to marry the giant Thrym so he can get his hammer back ("Thrymskvida"), is the hapless butt monkey of Odin's pranks ("Harbardsliod"), or goes on a memorable fishing trip with the giant Hymir and almost catches Jormungandr ("Hymiskvida").

Apart from these narrative ballads, quite a few poems are essentially knowledge poetry, with the plot being only an excuse to present mythological knowledge, lists of poetical synonyms, or collections of riddles. Possibly the most fascinating part, however, is "Havamal", a collection of proverbs and advice poetry, presented as a long monologue of Odin.

Ballads about mortal heroes of the legendary past. The greater part of the heroic cycle is concerned with a single plot line, the story of Sigurd, the slayer of Fafnir the dragon, and his in-laws the Niflungs, who murder Sigurd but, with poetical justice, fall prey to their own in-law Atli, who in turn is offed in retaliation by his wife Gudrun … well, it's complicated. In the end, everybody kills everybody.

However, as the lays are of different age and authorship, they don’t form a continuity and there are repetitions, gaps and continuity snarls between them. What’s more, eight leaves from the middle of the heroic cycle have been ripped out by an unknown rascal between the 13th and the 17th century; the resulting gaping hole has been dubbed the "Great Lacuna"note A "lacuna" is a missing or unreadable section in a manuscript. by philologists. The contents of the Great Lacuna we can only infer from the Völsunga saga, which is essentially an adaptation of the heroic cycle of the Codex Regius into a prose narrative. Volsunga Saga quotes 4 stanzas from the Lacuna verbatim; still, it’s estimated that a good 200 stanzas are missing.

Mythological poetry found interspersed in Icelandic manuscript outside of the Codex Regius and the Snorra Edda. A few "Eddica minora" are found only in MSS as young as the 17th century; these are sometimes excluded from editions for being "not authentic"; this, of course, means little more than they are (probably) not medieval, as any definition of what is an "authentic" "Eddic lay" is ultimately self-referential.

Because of the debates about age and "authenticity", and the different standards of what constitutes an "Eddic" poem, the selection of these can vary considerably between different editions of the Poetic Edda.

The Poetic Edda at sacred-texts.com

The Codex Regius provides examples of the following tropes:

Eddic poems outside of the Codex Regius provide examples of: