Literature / Ragnar Lodbrok and His Sons 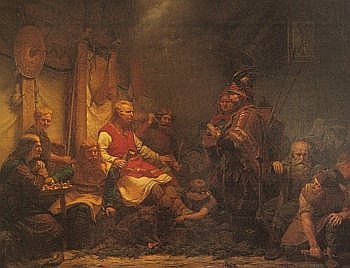 The Saga of Ragnar Lodbrok (Ragnars saga loðbrókar) and Tale of Ragnar’s Sons (Ragnarssona þáttr) are two 13th century Icelandic sagas, telling the story of a prestigious clan of enterprising warlord-kings, set in a fictionalised 9th century, in the heyday of The Viking Age. The authorship is anonymous. Despite what the titles suggest, the two works are not sequels, rather different treatments of the same story, but with a shift in emphasis, and also a few inconsistencies between them. The "Tale" is much shorter than the Saga.

Ragnar succeeds his father as king of Sweden and Denmark. While he is still a youngster, he kills a giant snake, wearing special clothes made of fur for protection, which earns him his unique nickname Loðbrók (a.k.a. Lodbrok, Lothbrok, or Lodbrog, depending on transliteration)—"Hairy-Breeches"note Or "Shaggy-pants". There are numerous translations of Loðbrók but most often it is left untranslated.—and also the jarl’s daughter that the monster guarded, Thora Hart-of-the-Town.

But Thora dies young, and Ragnar takes another wife—Kraka, a mysterious girl raised by a poor couple, who will eventually reveal a lofty heritage. Thora’s sons are Erik and Agnar; Kraka’s sons are Ivar the Boneless, Bjorn Ironside, Hvitserk, Rognvald, and Sigurd Snake-in-the-Eye. In time, the sons follow in the footsteps of their father and take up careers as viking raiders and conquerors—and soon, father and sons find themselves competing against each other in a quest for glory that ravages half of Europe, drips of blood, and entertains the reader.

Ragnar Lodbrok and his sons were popular stuff of legend of medieval Northern Europe; however the details of the story vary considerably—especially the number and names of the sons. Nevertheless, many of the episodes are obviously based on history: Ragnar may be inspired by a certain viking warlord Reginer who sacked Paris in 845, Ivar the Boneless is modelled on a certain "Hinguar"note A Latinization of "Ingvar", Ivar for short. who, together with his brothers, invaded England in 865, and the Ragnarssons’ foray to the South mirrors a real-life viking invasion of the Mediterranean that occurred in 859-862. Altogether, the saga is cleverly stitched between the age of legend and history—while the Ragnarssons are descended from mythic heroes, they are also (supposedly) the ancestors of the historical royal houses of Norway, Denmark and Sweden. For more, sometimes conflicting material on the tale of Ragnar, see book 9 of Gesta Danorum, Krákumál, and The Tale of Norna-Gest.

; Tale of Ragnar's Sons can be read here.

The sagas of Ragnar Lodbrok and his sons are among those medieval works that deal explicitly with viking expeditions (even if they are not strong on the realism), and portrayal of Vikings in fiction often takes inspiration from them. This begins, of course, with all the fictional Viking chiefs called Ragnar. The 1958 Hollywood epic The Vikings, the 2010s TV series Vikings, and novels such as the Hammer and the Cross trilogy and the Saxon Stories series (adapted for TV as The Last Kingdom) are loosely based on the sagas. Ragnar and his sons are also playable in Crusader Kings II: Ragnar is the heir of Sigurdr of Uppland at the 769 AD start date in the "Charlemagne" DLC, while "The Old Gods" starts during the Norse invasion of Britain with all the brothers featured.

Tropes in Saga of Ragnar Lodbrok and "Tale of Ragnar's Sons":