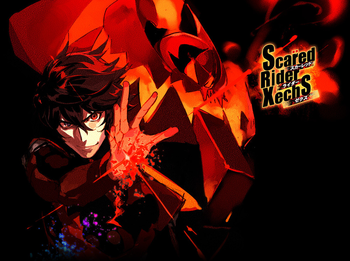 That order, is it for love, or for death
Advertisement:

Creatures known as the Nightfly O'Note, which come from the Red World, a world symbolizing instinct are attacking Earth, which is known as the Blue World, which symbolizes reason. Seventeen year old Akira Asagi is assigned as the commander of the combat unit "IS" also known as the "Scared Rider Xechs". Together, they will protect their world and humanity.

A anime adaptation by Satelight aired as part of the Summer 2016 Anime season.