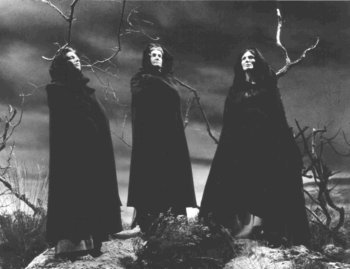 "In effect, however, those three were sisters as well as mothers, just as there are three Muses, three Graces, three Fates, and three Furies."
—The Three Mothers, Inferno (1980)
Advertisement:

Supernatural women often form teams of three. The most common variant types are witches, fairy godmothers, and female seers. They may or may not be actual sisters.

The Trope Codifier for the modern era are the three prophetic witches of Macbeth, who have also supplied or reinforced other classic witch stereotypes like warty noses, bubbling cauldrons, and animal familiars. Shakespeare's magical trio, however, is itself based in folklore with roots in pre-Christian mythology, namely, the belief in a trinity of goddesses whose job in the greater order of things is to assign fate to us mortals. This notion can be traced back to the Moirai or "Fates" of Greek Mythology (though probably not much further).

The women of fate were not categorically friendly nor hostile, as they distributed both the good and the bad things in life. When Christianity did away with the goddesses of old, the trio lived on in fairy tales and folklore under new labels, although they now were more likely to be limited to either a harmful or a helpful role—either as Wicked Witches who make bad things happen to people just because, or benign Fairy Godmothers who aid and protect. What has remained is that whenever such magical women appear in groups, there tend to be three of them.

A third reincarnation of the three women of fate is a trio of seers who predict fate, but do not interfere with it directly. When the Weird Sisters are more specifically embodying or invoking the goddesses of fate, they will be equipped with spinning or weaving tools.

Generally, a mortal is most likely to encounter the Weird Sisters at the important times in life—birth, coming-of-age, death, any major turning point or crisis between these times.

The Trope Namer is not strictly Macbeth, but its direct source, the Chronicles of England, Scotland, and Ireland by Raphael Holinshed, which opines that the three prophetic ladies who met Macbeth

"were either the weird sisters, that is (as ye would say) the goddesses of destinie, or else some nymphs or feiries, indued with knowledge of prophesie by their necromanticall science."

In the Macbeth print of 1623, the three witches are referred to as "weyward" respectively "weyard Sisters". This is variously rendered as "wayward" or "weird" by modern editions, and suggests that Shakespeare's contemporaries were uncertain about the meaning and spelling of the phrase. In reality, "weird" is a Scots derivative from Old English wyrd, which means "fate". As the word was not widely known then, it were the very "Weird Sisters" of Holinshed and Shakespeare that led to the word being re-interpreted as "uncanny", "supernatural". This was the primary meaning of "weird" until relatively recently.

In most instances from genuine mythology or folklore, the Weird Sisters are either all of the same or similar age, or one of them is distinctly older or younger than the other two. Only when each of the three has their own distinct profile, they may be the The Hecate Sisters. The Three Faces of Eve usually does not apply, because a Weird Sister may be a maiden, a mother, or a crone, but almost never a child. May be a Power Trio.