Literature / The Tale of Norna-Gest 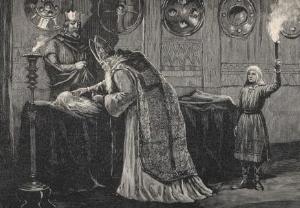 The Tale of Norna-Gest (Norna-Gests þáttr) is a short Icelandic saga from about 1300 AD. It can best be classified as a lygisaga a.k.a. "fairy-tale saga"note The literal translation is, of course, 'lie-story'., a literary fairy tale.

A stranger called Gest appears at the court of King Olaf Tryggvason in Trondheim, Norway 998 AD. He is old yet surprisingly strong, and astounds the king's retainers by his skill in harp-playing and story-telling. Questioned how he can know so much about times long ago, the stranger reveals that he knew Sigurd Fafnisbane personally, as well as the sons of Ragnar Lodbrok, Harald Finehair of Norway and King Ludwig of Germany. This amazes the King and his retainers, as all these men are long dead, some of them for centuries. Finally Gest, who now reveals that he is also called Norna-Gest, tells his full story:

When he was recently born, his father had invited three seeresses, or norns, to foretell the child’s future. Two of the norns made good prophecies, but the last one was in a bad mood and when some rude guests enraged her, she cursed Gest to live no longer than the candle that burned beside his cradle. So the other norns extinguished the candle and told Gest’s parents to keep it, and Gest gained immortality — he cannot die before the candle is used up.

On the wish of King Olaf, Norna-Gest agrees to be baptized. After a time, King Olaf asks him how long he plans to live. Norna-Gest says that he wants to die, being three hundred years old. In the presence of King Olaf, he lays down on a bed and lights the candle. A priest gives him the last rites. When the candle burns out, he dies.

Can be read online as translated by Nora Kershaw (1921)

Tropes in "Tale of Norna-Gest"

Tropes in the frame story