Literature / The Tale of Styrbjorn 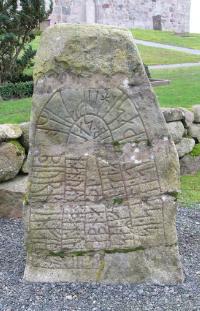 "He did not flee at Uppsala, but slaughtered as long as he had a weapon." Runestone DR 279

"The Tale of Styrbjörn, Champion of the Swedes" (Styrbjarnar þáttr Svíakappa) is an Icelandic short tale found in the Book of Flatey

(c. 1390). It is quite short and likely a condensed abstract of a saga which is unfortunately lost. The same story is referred to in various other Icelandic sagas and is also told somewhat differently in Saxo Grammaticus' Danish History.

The Kingdom of Sweden is ruled jointly by the brothers Olaf and Erik. Olaf dies suddenly while his son Björn is still a child. When Björn is twelve years old, he asks his uncle Erik for his birthright – one half of the kingdom. But Erik puts him off, telling him to wait until he is sixteen.

But Björn, who is unusually strong and proud, gets in all kinds of fights and even kills one of Erik’s courtiers. For his aggressive spirit, he is nicknamed Styrbjörn, or Styrbjörn the Strong because of his strength. The Swedish farmers don’t like him and vote on an assembly that he is not fit to be king. To appease him and get him out of the kingdom, Erik gives him 60 warships so he can go on viking cruises.

Styrbjörn plunders up and down the shores of the Baltic and finally defeats even the mighty Jomsvikings, forcing them to accept him as their chief. Next, he invades Denmark, until the Danes under their king Harald Bluetooth meet his demands – one, to give him the princess Thyra in marriage, two, to assist him with their entire fleet in three great battles, and three, to let him hand-pick one man from Denmark that must accompany him on his next campaign. When they agree, Styrbjörn, of course, chooses the king, Harald.

Now finally feeling powerful enough, Styrbjörn sets out with his massive army to Sweden, ready to challenge his uncle and take the kingdom by force. Who will win?

Fun fact: The Battle of Uppsala is attested on a handful of 10th century runestones

that were erected for fallen fighters.

"Tale of Styrbjörn" provides examples of the following tropes: