Literature / The Tale of the Bamboo Cutter 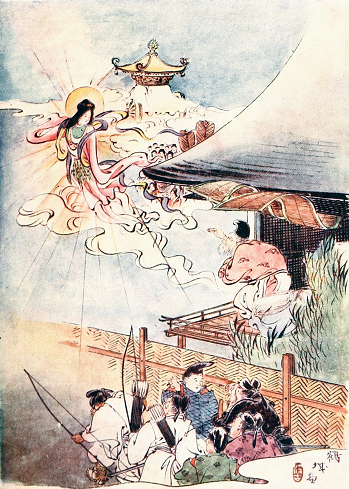 Kaguya ascending to the Moon.
Advertisement:

The Tale of the Bamboo Cutter (Taketori Monogatari) is a Japanese folktale dating to approximately the 10th century. It is considered the oldest monogatarinote fictional prose narrative in Japanese literary history.

As the story goes, an old bamboo cutter chances upon a beautiful stalk of bamboo, in which he finds a lovely baby girl the size of his thumb. Since he and his wife have no children, they adopt the baby as their own and christen her Nayotake no Kaguya-hime ("Shining Princess of the Young Bamboo"). Kaguya brings the family wealth — every time the bamboo cutter cuts a stalk, he finds a nugget of gold — and soon grows into a woman of extraordinary beauty. This attracts five suitors who want to marry her. Unwilling to marry any of them, Kaguya asks them to find an impossible item, and remains unmarried when all of them fail. Eventually the Emperor himself comes to ask for her hand. Kaguya rebuffs him, but they remain in contact, and the Emperor eventually falls in love with her.

Eventually, Kaguya reveals to her parents that she belongs to a race of people who live on the moon, and she must now return to them. The Emperor sends his men to try and stop her departure, but to no avail — the moon's entourage brings Kaguya back to their home, breaking the hearts of her adoptive parents.

The Emperor receives an elixir of immortality left to him by Kaguya. Unwilling to live without her, he orders his men to bring the elixir to the summit of the mountain closest to heaven and burn it along with a letter for her. This is mentioned as the reason smoke rises from Mount Fuji.

Since it's about a thousand years old, the story is in public domain, and has been adapted many times. Direct adaptations include Princess From the Moon in 1987 and The Tale of the Princess Kaguya in 2013. It also memorably received a Whole Plot Reference in 1989 Big Bird in Japan with the story narrated by Pat Morita. Many other pieces of media also take inspiration from the story, to the point that you can expect a female character named "Kaguya" to have something to do with the legend. Due to its extraterrestrial plot elements, it is also considered one of the earliest examples of Science Fiction.