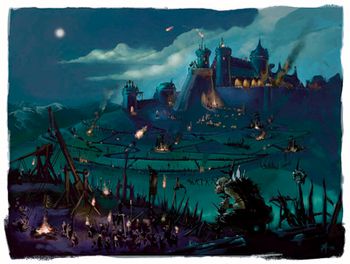 This is a subtrope of The Epic in which the course of an actual military campaign in some combination of Real Life or traditional history is the main subject. Because of this, the plot, setting, and characters will come pre-constructed. This decreases flexibility but saves work for the author, though he still has enough to do. It is written from an authorial omniscience perspective and shows the viewpoint of one Historical Domain Character after another on both sides. It has the advantage that these are usually written about a real battle. This type leans heavily on special effects.

If the title of a movie is the same as the name by which a campaign is recorded in historical accounts, that is a clue that this is a Battle Epic.

This trope is Older Than Feudalism. However it is most common in films. Sometimes it can be a TV mini series.