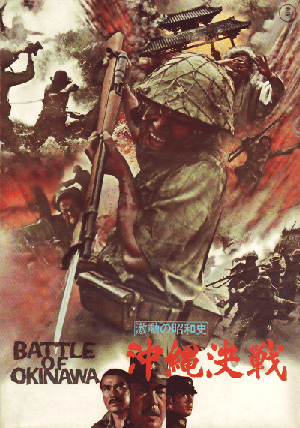 Battle of Okinawa (激動の昭和史 沖縄決戦 Gekidō no Shōwashi: Okinawa Kessen) is a 1971 film directed by Kihachi Okamoto with effects by Teruyoshi Nakano, based on the titular battle in World War II from the Japanese perspective.
Advertisement:

With the country on the brink of disaster and defeat imminent, Japan fortifies its last defensive stronghold, the island of Okinawa. This final stand against the Allied attack soon becomes the bloodiest battle of the Pacific Theater and takes the horrors of war to a level never before seen, as the desperate Japanese forces try to demonstrate to the Americans what they should expect when they assault the Japanese mainland.

Reportedly Hideaki Anno's favorite film ever. A photo of its director, Kihachi Okamoto, is used to depict the character Goro Maki in Shin Godzilla.

It should be noted that this is one of the few Toho war films released in America, which is strange considering the film's very unsympathetic portrayal of American forces.