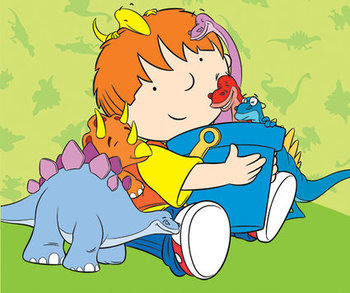 Truth in Television. There is something of an idea that dinosaurs are kiddie, or that dinosaur products and fiction should solely be aimed at children (especially young boys).

One reason this trope exists is that dinosaurs are a lot like fairy tale creatures (particularly dragons). Also, as they don't exist anymore, you need a lot of imagination to reconstruct how they lived, and children use their imagination much more than adults. Dinosaur toys and media are often aimed at boys due to stereotypes and gender roles that boys like "cool things" while girls like "cute things" (which dinosaurs usually aren't seen as, though feathered dinosaurs are often seen as cute).

Sometimes, paleontologists will describe themselves as kids who never "grew out of" their dinosaur phase. As a result, adults who still like dinosaurs can be stereotyped as Manchildren. Compare Boys Like Creepy Critters, All Girls Like Ponies and Princess Phase.