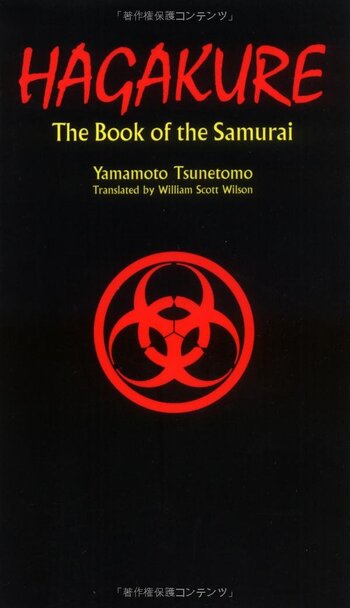 The Way of the Samurai is found in death.
Meditation on inevitable death should be performed daily.
Every day, when one's body and mind are at peace,
One should meditate upon being ripped apart by arrows, rifles, spears, and swords, being carried away by surging waves,
Being thrown into the midst of a great fire, being struck by lightning, being shaken to death by a great earthquake,
Falling from thousand-foot cliffs, dying of disease or committing seppuku at the death of one's master.
And every day, without fail, one should consider himself as dead.
This is the substance of the Way of the Samurai.
— The Hagakure
Advertisement:

The Hagakure (meaning "Hidden by the Leaves"), or Hagakure Kikigaki, is the Book of Bushido. It is a practical and spiritual guide for a warrior, drawn from a collection of commentaries by the samurai Yamamoto Tsunetomo, former retainer to Nabeshima Mitsushige, the third ruler of what is now the Saga prefecture in Japan. The book was written over a period of seven years, after Tsunetomo retired as a samurai and lived in semi-seclusion as a Buddhist convert. An old friend by the name of Tsuramato Tashiro, a younger samurai, would frequently visit. Over the course of seven years (1709-1716), he had dictated every personal thought, recollection, anecdote or philosophical musing Tsunetomo had. It would be published several years later, well after the older samurai was dead. Obscure at the time of publication, it has since become one of the most influential treatises on the samurai way of life, alongside other integral works as Miyamoto Musashi's Book of Five Rings and Book of Family Traditions on the Art of War by Yagyu Munenori.

The Hagakure was written a century after the start of the Tokugawa era. As a time of relative peace and stability, society was changing, and with a total lack of large scale wars the samurai were transforming from warriors to administrators of the land. The book outlines what the author felt should be the true role of the warrior in society. His work represents one approach to the problem of maintaining military preparedness and a proper military mindset in a time when neither had much practical application.

A must read for historians, fans of Japanese culture and Samurai, and for those who even practice the art of Bushido. Also keep in mind that the translations of the Hagakure are only a small part of the original book— William Scott Wilson's translation is composed out of roughly 300 fragments, and the original text out of 13000.