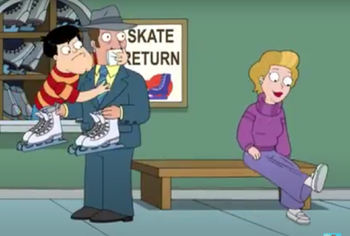 Maybe one of the parents died, and the kids are afraid of them being forgotten. Maybe they got divorced, or are in the process of it, and the kids want them back together. Maybe there are reasons that are completely unrelated to the family dynamic. Whatever the reason, the children are not happy with the idea of their newly-single parent moving on with someone else. For some kids, there's only one solution—sabotage any relationships their parents might try to have.

The kids come up with elaborate schemes to scare away any potential suitor for their single parent, and Hilarity Ensues. If the suitor has the warning signs of a Child Hater or Wicked Stepmother, this trope can be justified. If the suitor they're trying to chase away is actually a nice person, the kids will usually see the error of their ways and accept the suitor into their lives. Count on at least one speech where the parent in question tries to assure the kids that just because they're seeing someone new doesn't mean they love them any less.

This trope is the opposite of Kids Play Matchmaker, where the children are trying to create romance for their parents instead of destroy it. The two can overlap if the child is chasing away a romantic candidate specifically so their parent can be with the approved choice of their children.

Can also apply to older siblings or other relatives, though it's usually parents who are at risk of having their dates ruined.

Can be set off by Guess Who I'm Marrying? or Remarrying for Your Kids. Usually a Sub-Trope of Parent with New Paramour, Relationship Sabotage, and Blended Family Drama.