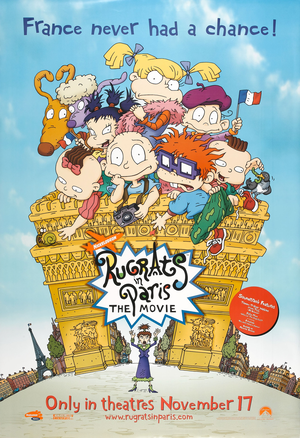 Rugrats in Paris: The Movie is the second of three animated movies based on the Nickelodeon cartoon Rugrats, released in 2000 between the show's sixth and seventh seasons. The film was directed by Stig Bergqvist and Paul Demeyer, with a screenplay by J. David Stem, David N. Weiss, Jill Gorey, Barbara Herndon and Kate Boutilier. Topping the introduction of Tommy's brother Dil in The Rugrats Movie, three new series regulars make their debut in this film.

The plot is as follows: Chuckie Finster (Christine Cavanaugh) realizes he has an empty void in his life left by the death of his mom, and he wishes he had a new mother to help him deal with his loss. Meanwhile, a Reptar robot that Stu Pickles (Jack Riley) made for EuroReptarland, a French theme park featuring Reptar, malfunctions, so he is called to come there for repairs, bringing all the kids' families with him.

Over in Paris, we meet Coco LaBouche (Susan Sarandon) and her smarmy sidekick Jean-Claude (John Lithgow). Coco is looking to be promoted to the head of Yamaguchi Industries (the parent company for the Reptar-franchise). Since Mr. Yamaguchi (Mako), the current head of the company (and Coco's boss), wants his successor to have "the heart of a child," especially since kids are the main audience for the Reptar-franchise. Learning this, Coco lies to her boss by claiming that she loves children and is even engaged to a man with a child of his own. When Coco catches Angelica (Cheryl Chase) having been eavesdropping on her, Angelica offers to help set her up with Chuckie's dad, Chas (Michael Bell). Coco then pretends to take interest in Chas and gradually wins him over but has little luck trying to bond with Chuckie (especially since she shows what's Beneath the Mask to the kids behind Chas's back). During their Parisian adventure, the Rugrats meet a girl their age, Kimi Watanabe (Dionne Quan), and her mother, Kira (Julia Kato), an assistant of Coco's, who develops a mutual romantic interest in Chas. Also, Tommy's dog Spike falls for a poodle named Fifi.

The film is notable for being Cavanaugh's final performance as Chuckie and final role before her retirement from acting later that year.

All of Chuckie's friends dance with their mothers while Chuckie, whose mother passed away, stands in the corner alone.

Example of:
Alone Among Families

All of Chuckie's friends dance with their mothers while Chuckie, whose mother passed away, stands in the corner alone.