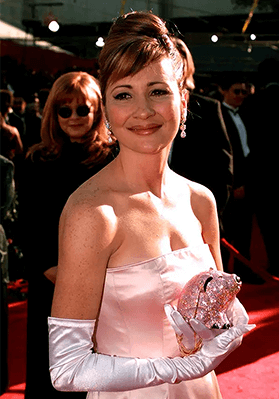 Christine Josephine Cavanaugh (née Sandberg, August 16, 1963 — December 22, 2014) was an American voice actress who reached prominence in the 1990s before abruptly retiring in 2001 to focus on living a quiet, simple life with her family. Afterwards, nothing was heard about her... until December 22, 2014, when she died from leukemia. To make matters worse, her death wasn't publicly reported until a week later.

She was best known as the original voice of Chuckie Finster in Rugrats (she was replaced with Nancy Cartwrightnote the voice actress best known for playing Bart Simpson and other boy characters — notably, Ralph Wiggum, Todd Flanders, Kearney the bully, Kearney's son, and Nelson Muntz — on The Simpsons for the last couple of seasons following her retirement). She also played Gosalyn Mallard in Darkwing Duck, Bunnie Rabbot in Sonic the Hedgehog (SatAM), Babe in the original 1995 film Babe, Dexter in Dexter's Laboratory (replaced with Candi Milo after a few episodes of the third season) Marty Sherman (Jay Sherman's son who lives with Jay's bitter, unfaithful ex-wife, Ardeth) in The Critic, and Oblina in Aaahh!!! Real Monsters.

She was known for cohorting with Elizabeth "E.G." Daily, who played Tommy Pickles in Rugrats. That relationship even continued when Elizabeth replaced her as Babe in Babe: Pig in the City, and Christine was "happy" for her Rugrats co-star. This recast was the result of Christine holding out for a higher salary.

Christine was also an on-camera actress. She was part of the cast in Salute Your Shorts as Counselor Ugg's crush (a female mail carrier), she guest-starred on an episode of Cheers, and she notably had a guest-starring role on The X-Files.