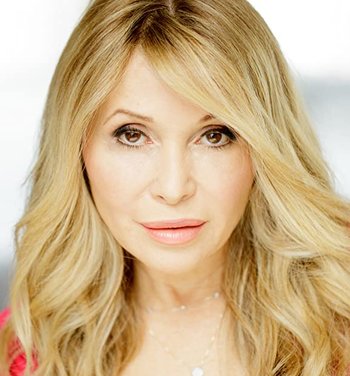 "It takes a lot more than a couple of cheap shots to make us cry!"
Advertisement:

Elizabeth Ann Guttman (born September 11, 1961), known professionally as E.G. Daily, is an American actress, voice actress, singer, and comedian best known as the voice of Tommy Pickles from Rugrats and Buttercup from The Powerpuff Girls (the original 1998 version, not the 2016 reboot). She's also a singer from way back in the 80s (she even appeared as a musical guest on a season 11note 1985-1986 episode of Saturday Night Livenote the episode she was a musical guest for premiered on May 17 of 1986. The host was Jimmy Breslin, a Pulitzer Prize-winning American journalist and author who writes columns for New York Daily News Sunday edition. The episode had special guest appearances by comedian Sam Kinison, boxer Marvelous Marvin Hagler, and a second band called Level 42. Daily performed a song called "Say It, Say It"); two of her songs even showed up in Scarface (1983) and one in Grand Theft Auto: Vice City. She also appeared in Better Off Dead singing at the high school dance and another of her songs, "Mind over Matter", was in the soundtrack to Summer School (she had replaced Debbie Harry, who had recorded it originally, only for record company politics to intervene).

In 2013, she auditioned for the fifth season of The Voice. Her rendition of Faith Hill's "Breathe" convinced both Cee Lo Green and Blake Shelton to turn their chairs for her. She ended up selecting Blake as her coach.