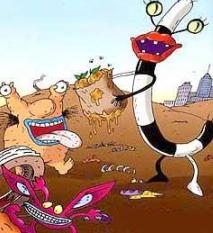 Aaahh!!! Real Monsters was a show that aired on Nickelodeon from 1994 to 1997. It serves as the 5th show in the Nicktoons series. It focused on three monsters who lived under a dump and were in a monster school, taking "scares" as lessons. The main cast included:

The complete series was released on DVD on October 8th, 2013